Beginning in 2005, Kaohsiung Medical University (KMU) launched a collaboration with Harvard University which sends hundreds of medical students to Harvard for internships. This program gradually expanded to cover bilateral exchanges with the KMU School of Public Health, opening opportunities for research in tropical medicine, liver disease, occupational and environment health, and safety in heavy industry, and setting KMU as a model to follow for establishing relations with elite universities abroad.

Founded on such high aspirations, KMU strives to instill a deep sense of service in its students. KMU graduates have been the recipients of many accolades and awards for dedication and service, honoring the ideals of the school’s founder.

While much attention has focused on the achievements of medical schools in northern Taiwan, physicians and researchers at KMU have been happy to work quietly and diligently out of the spotlight. One of the university’s notable achievements is its 14 year alliance with Harvard University, one of the closest relationships any university in Taiwan enjoys with Harvard. KMU Senior Vice President Ming-Lung Yu notes that, “The process of internationalizing KMU hasn’t been widely publicized, and there are many people in Taiwan who are still unaware of our achievements. We just get on with the task at hand without much fanfare.” 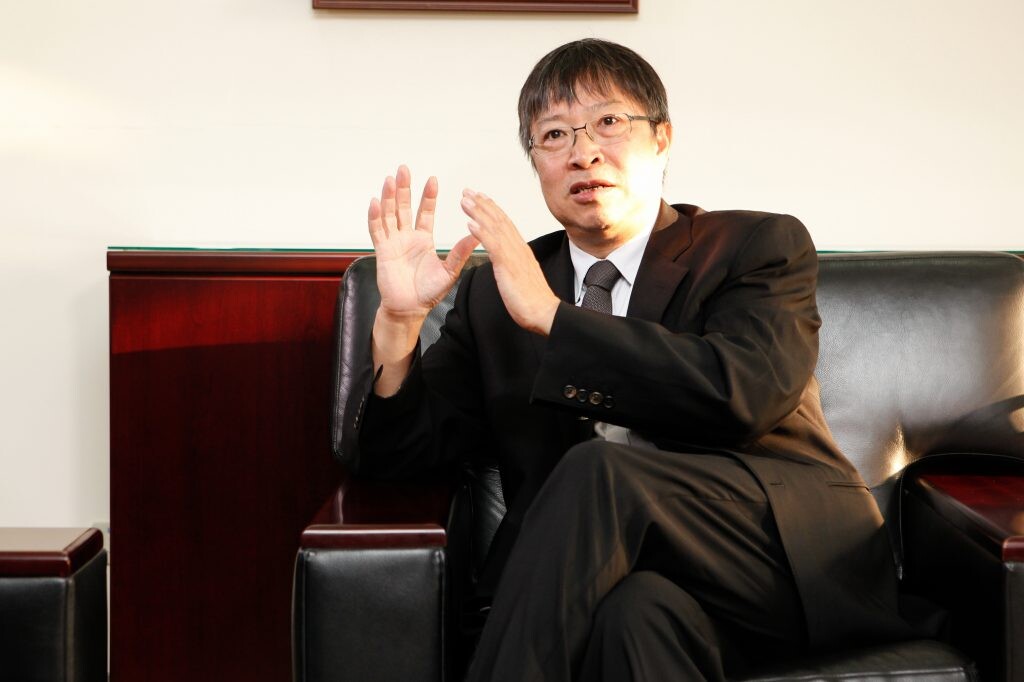 In 1991, Professor Juei-Hsiung Tsai, with nearly half a century of experience at KMU and Massachusetts General Hospital, began corresponding with his former student Arther Mu-En, then teaching at Harvard Medical School. A year later, the KMU Board of Directors appointed Professor Tsai as Dean of KMU and he asked Professor Lee to come back to KMU. Although he ultimately decided to decline this request and stay at Harvard, this initial point of contact between the two institutions would later bear fruit.

Dean Tsai internally promoted a program of scholarly exchange. KMU board Chairman Tian-Zhi Chen fully supported these efforts, allocating US$1m to establish a foundation to facilitate exchange, and allowing for the establishment of a sister-school relationship between the two institutions, forming a solid foundation for future visits and exchanges.

Initial exchanges consisted of six KMU students visiting Harvard Medical School’s affiliated hospitals for one or two months of intensive training. As the program has matured over the years, now efforts are underway to recruit reciprocal visits from Harvard students to Taiwan.

“At first, [Harvard] didn’t really know us,” says Professor Ming-Tsang Wu, Director of the KMU International Academic Exchange center. “First we sent some students to MGH, followed later by doctors and instructors, to exchange ideas. The Harvard people were very enthusiastic. They wanted to keep our teachers there!” This recognition was an important affirmation of the quality of the training being provided at KMU. 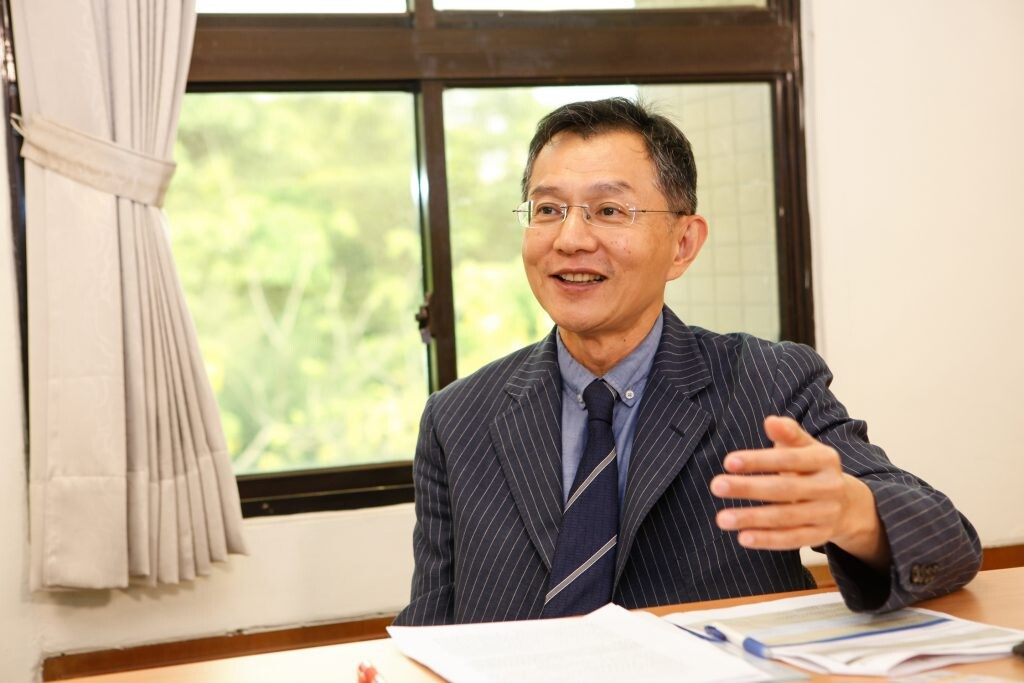 Professor Wu noted that, even world leading institutions like Harvard and its affiliated hospitals still have room for improvement. The United States is a melting pot, attracting immigrants from all over the world, many bringing with them specialized regional health concerns with which American physicians may not be particularly familiar. “KMU has a high degree of expertise in treating hepatitis, oral cancer, esophageal cancer and other subtropical and tropical illnesses. Some tropical diseases, like dengue fever, hardly ever appear in the United States, and tropical diseases require specialized prevention and treatment.”

Aside from medicine, the two institutions also have additional synergies. Professor Wu pointed out that KMU’s home city of Kaohsiung features considerably more heavy industry than Boston. “Public health has to be considered in the context of the surrounding environment,” he said. “Boston is an academic and services-oriented city, with hardly any heavy industry, creating a blind spot in their faculty. Kaohsiung’s reliance on heavy industry turns out to be an advantage in terms of medical training, and the faculty at the Harvard School of Public Health are very glad to benefit from our experience.”

Each of the Harvard students was placed in a group of KMU students, giving all students an opportunity to develop new language and communication skills in English and Chinese. The groups visited a range of different types of heavy industrial sites, conducting field observations and writing group reports to evaluate occupational health conditions and risks.

KMU Associate Professor of Public Health Chiung-Yu Peng said that the point of the exercise was to give students practical experience in evaluating a diverse array of industrial contexts. “You can’t get a real sense of occupational safety issues from listening to presentations in a conference room.” 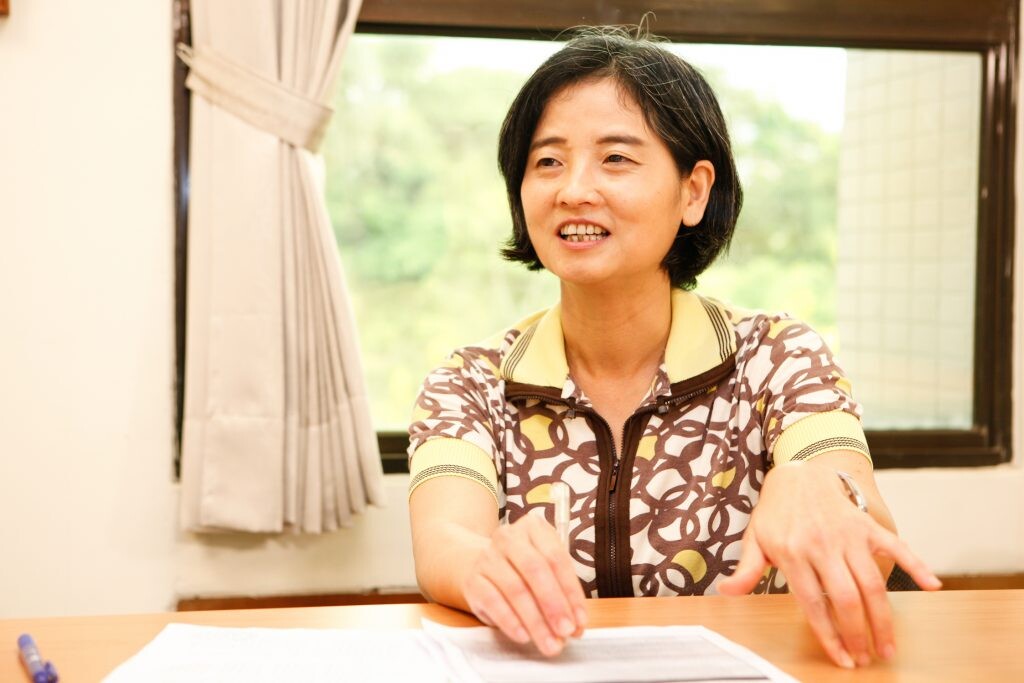 Ya-Han Tseng, a masters student in the Department of Public Health remembered walking over an elevated bridge at China Steel Corp., peering down into a working blast furnace. “I’d never seen molten iron in person before. It was incredibly hot!” Pei-Wen Wu, a doctoral student in the department, observed that the Harvard students were taken aback by the demanding physical conditions of working in industrial factories. “They couldn’t imagine working in such a place. Even with ear protection, it was still deafening.”

China Steel Corp. management also designed a hands-on area in which the students could simulate the work performed by high voltage electrical workers in the plant. Students quickly realized how difficult it is to climb towers carrying heavy electrical equipment, and the simulation gave them a sense of how quickly that fatigue can contribute to falls, leaving the students with a much better understanding of the occupational risks industrial workers face in the field.

In 2014, Kaohsiung was ripped apart by a gas line explosion that left 32 dead and 321 injured. LCY Chemical, operator of the faulty pipeline, has since implemented strict pipeline monitoring systems and is hoping to regain public trust, partly through actively participating in the KMU Health Management Practices Course.

Peng Chiung-yu said the company provided students with opportunities to learn about equipment monitoring standards and practices, and the importance of carefully managing pressure, temperature and concentration of chemical substances throughout the industrial environment. “One wrong move, and you could have an explosive situation on your hands.” Following the site visit, plant managers actively engaged with the students, soliciting their observations and feedback to further improve their operations.

Pei-Jing Yang, a doctoral student at the KMU Department of Public Health, said that the Harvard students were very impressed with the integration of the President Enterprises conglomerate, comprising everything from food processing to convenience stores, online bookstores, drug stores and logistics. “They kept asking, how can one company do everything on its own? President Enterprises truly covers all daily consumer needs, which was something they hadn’t seen before.”

The students visited the company’s food processing plant in Yongkang, Tainan to observe industrial processes. “We visited a flour storage facility, which was about five stories tall. They constantly monitored and controlled the internal temperature to prevent fires from breaking out.” In addition to the impressive safety procedures, Professor Peng also appreciated the fresh instant noodles they got to sample. “I’ve never had such delicious instant noodles,” She said. “Fresh really does make a difference!” 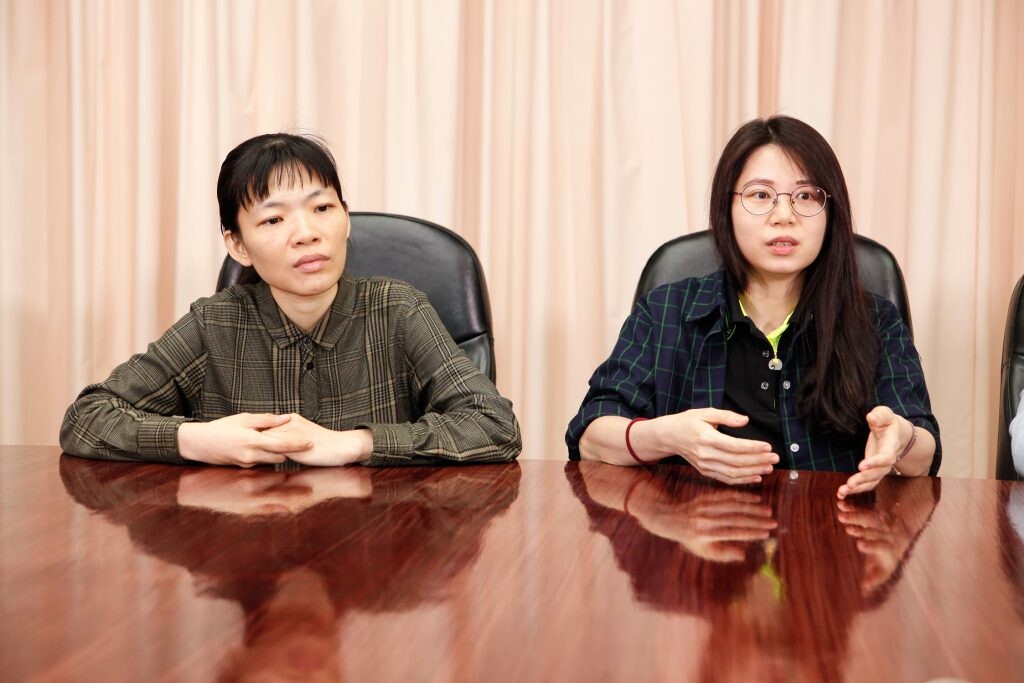 Identify the special qualities of sister schools, and create a solid foundation for exchange

Pei-Wen Wu, a doctoral student in the program sees the Harvard students as having a relative advantage in terms of learning methods. “We’re all used to using computers to create presentations, but they can create a PPT on their smart phones, and they’re also very accustomed to online collaboration. This way, they don’t have to reconcile different drafts, but can just immediately make revisions online.”

However, Masters student Lee Yan-chao believes that KMU students bring their own strengths. He felt that the most significant take away from the program was the series of industrial site visits. “When you’re actually on the scene, you’re immersed in an authentic sensory environment, full of noise and heat, which makes an indelible impression of the various risks that you can’t appreciate simply from reading about it.” 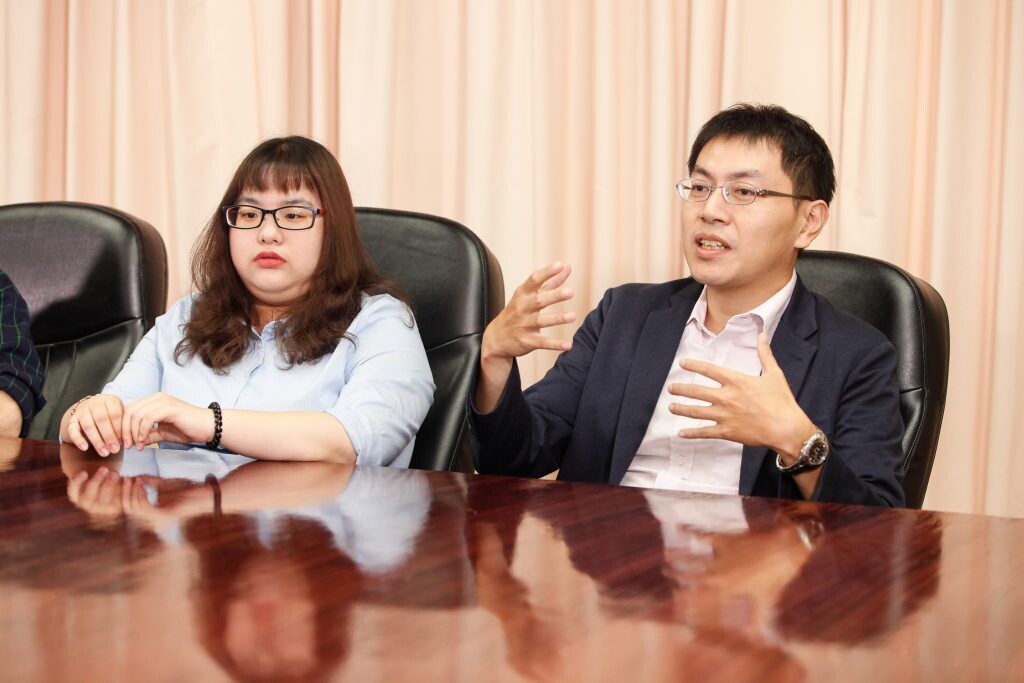 Professor Ming-Tsang Wu noted that Harvard also has a cooperation arrangement with universities in Cypus, and one of the Harvard students had participated in exchange programs in both Cyprus and Taiwan. Following the KMU course, he spoke with the KMU President and Chairman, saying he felt the KMU program was excellent and pragmatic, and the courses and site visits had given him lessons to last a lifetime.

Currently KMU has about 130 sister schools worldwide. While fewer than some other schools, this group represents the incremental selection of highly complementary institutions in KMU’s deliberate internationalization strategy. Professor Kuei-min Chen, 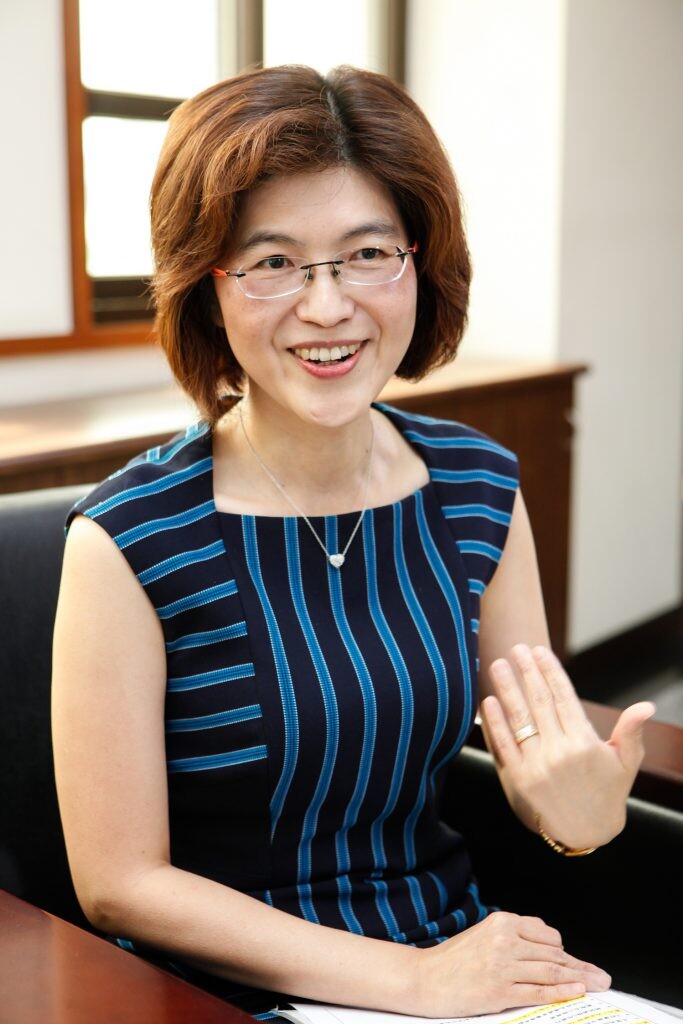 Given the success of KMU’s long-term collaboration with Harvard, . Professor Chen believes that further improving the quality of internationalization depends on clearly identifying the relative strengths of each sister school. Communication and exchange are critical. “You have to understand the advantages of each partner school to truly create new benefits.”

Pragmatism and ability to execute are the keys for KMUto establishing a strong model for the internationalization of Taiwan’s higher education sector.