In 2014, the German Language Department of the Wenzao Ursuline University of Languages College of Eurasian Languages signed a double-degree agreement with the Hochschule Konstanz University of Applied Sciences in Germany (hereinafter “Konstanz”). In four short years, the program has yielded excellent results with more than fifty students having either completed the program or currently applying. In 2017, Wenzao student Bai-Chiao Cheng was selected from among 300 international students to receive a German Academic Exchange Service (DAAD) scholarship and recognition in the local German media.

The Wenzao Ursuline University of Languages has a special atmosphere.

Wenzao Ursuline University of Languages is an oasis of calm, hidden amongst the hustle and bustle of Kaohsiung City, a leafy green campus fully of shade trees that keeps the whole campus cool on summer days. Though not as large as some other campuses, the Ursuline campus feels like a park, filled with shady trees, winding paths and isolated peaceful areas where groups of students study or chat under a cool afternoon breeze.

Founded in 1966 in Kaohsiung, southern Taiwan, Wenzao Ursuline University for Languages has recently formed an alliance with the famous Tung Hua Book Company, a collaboration that focuses on the publication of textbooks for language learners and future language teachers. This arrangement has allowed Wenzao to extend its influence from Southern Taiwan up to the Taipei metropolitan area.

President Dr. Mei-hua Chen is herself a Wenzao alumnus, and her history as a student here gives her unique insight into the institutions strengths and areas for improvement. “Currently, we haven’t yet established an exchange program with an Ivy League school, which is an important goal for establishing Wenzao’s international reputation.” 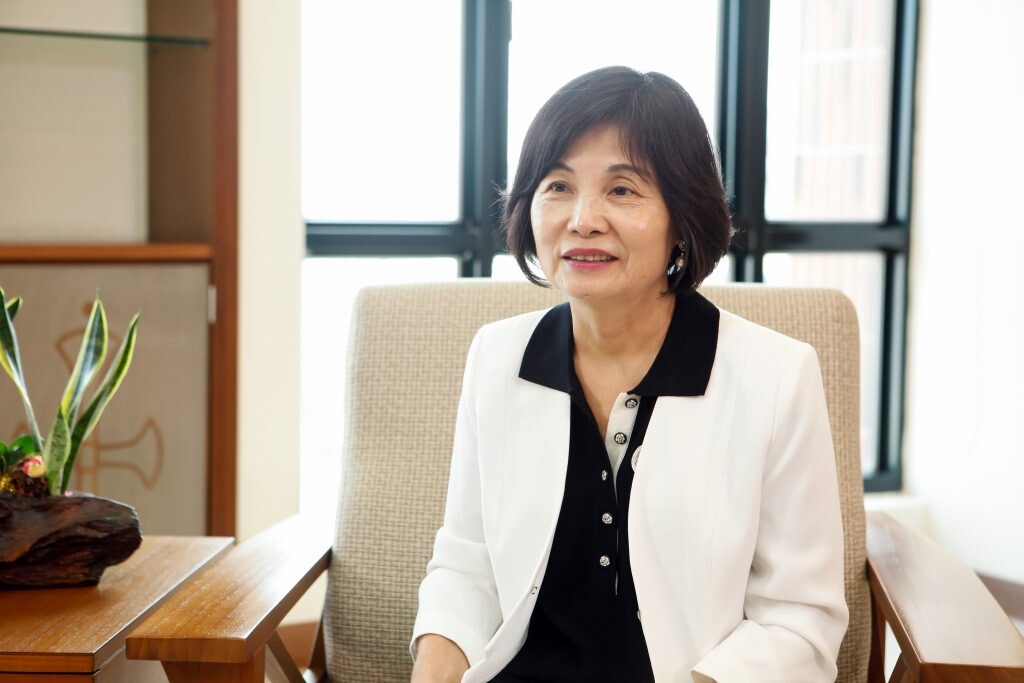 Wenzao has built a strong reputation by specializing in languages and the humanities, and the resulting education of its students could benefit from exposure to other areas including science, marketing, management and other technical fields. Seeking to develop a more well-rounded education for Wenzao students, President Chen sought to create a double-degree program with a school that can complement Wenzao’s strengths. Wenzao’s double-degree program with the the Hochschule Konstanz University of Applied Sciences in Germany is a strong indicator of the direction of her strategy for Wenzao’s future international development.

Years ago, Dr. Shoou-Huey Chang, now Dean of the Department of Eurasian Languages and also a Wenzao graduate, heard from a former classmate Hui-Fen Chiao who at the time was serving on the faculty of the Westsächsische Hochschule Zwickau University in Germany. “She said that double-degrees were becoming popular in Germany, and she mentioned Konstanz as having an excellent reputation, as well as offering instruction in Chinese language. Many of these students would like to come to Taiwan to improve their Chinese, and Wenzao would be the perfect place for them.” This remark set a seed that would slowly bear fruit.

In March 2015, Wenzao’s Director of International Relations Kit Lam was at an education forum in South Korea, where she met her counterpart from Konstanz, along with the Dean of the Asia Economic and Trade Department. Professor Chang was overjoyed and invited the two Konstanz representatives to visit Wenzao to discuss cooperation. That November, Chang and Lin visited Konstanz. “When we arrived, we immediately fell in love with Konstanz! It’s in a beautiful area, on the bank of the Rhine close to the border of Austria and Switzerland. It’s a perfectly romantic setting, with wonderful restaurants along the riverfront.”

Beyond the beauty of the campus, Chang and Chen were deeply impressed by Konstanz’s Department of Asian Economics and Trade, offering courses which would perfectly complement Wenzao’s focus on languages. 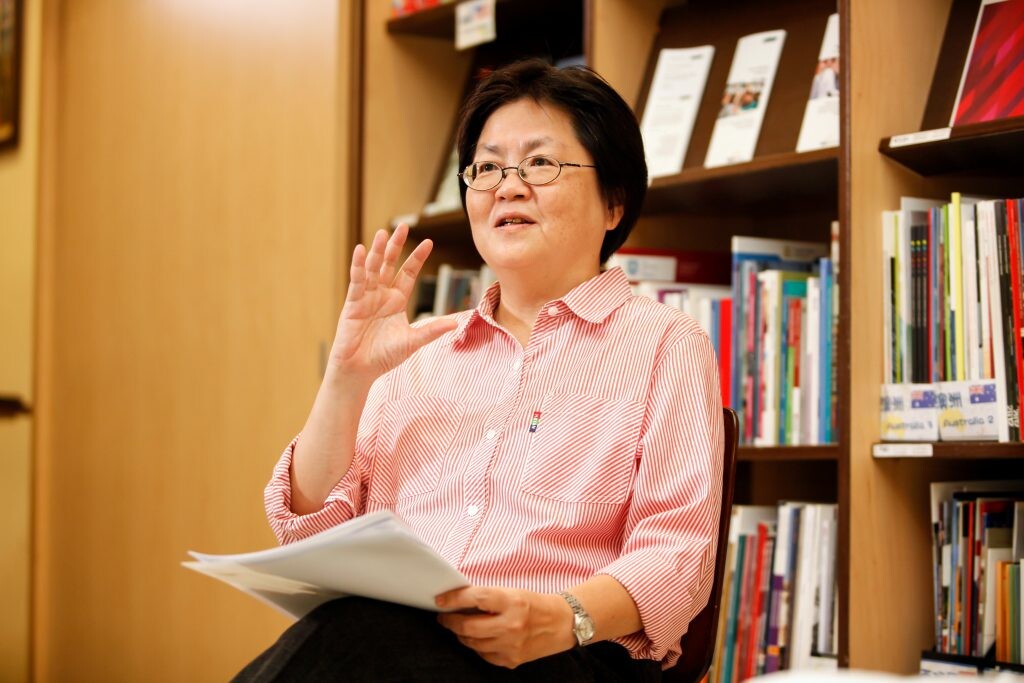 Dr. Shou-hui Chang, Dean of the Department of Eurasian Languages at Wenzao Ursuline University of Languages

Professor Chang’s analysis found that the Konstanz Department of Asian Economics and Trade not only provided courses in economics and trade, but also in German language and cross-cultural communication, and also offered industrial internships. Students in the department came from all over Asia, including Indonesia, Vietnam, Japan, South Korea and China, creating a highly supportive space in which students from a wide range of European and Asian backgrounds can interact and collaborate. “Wenzao students are already very adept at foreign languages,” she said. “What they need is to supplement their expertise with the high quality professional and cross-disciplinary courses available at Konstanz. This is the key value of this relationship.”

Preparing for the rigors of studying abroad

Before departing for Konstanz to pursue a double degree, Wenzao students are screened by a rigorous course of examinations and interviews with foreign teachers. The current round of interviewees include four Wenzao German language students: Yu-Tzu Lai, Hsin-Yu Chiang, Pei-Zhen Huang and Yu-Zhen Kao. To help students prepare for the exams, the school set up a two-week intensive course in economics and German language, meeting four hours each day. Each of the applicants expressed appreciation for the content of the courses, aside from the help it gave them in preparing for the exam.

“This two-week course is much more intensive than our general studies, and we’re getting a lot out of it, regardless of how we do on the exam,” they said.

Yu-Zhen Kao said that after she graduates next year, she’ll enter the workforce, but that a year in Germany would set her schedule back by a year. “I’m more concerned with my future, so I have to consider the cost/benefit of spending another year in school.” Pei-Zhen Huang said, “This is my last chance to study before I enter the workforce. If I can spend this year abroad, it would be a rare opportunity.” 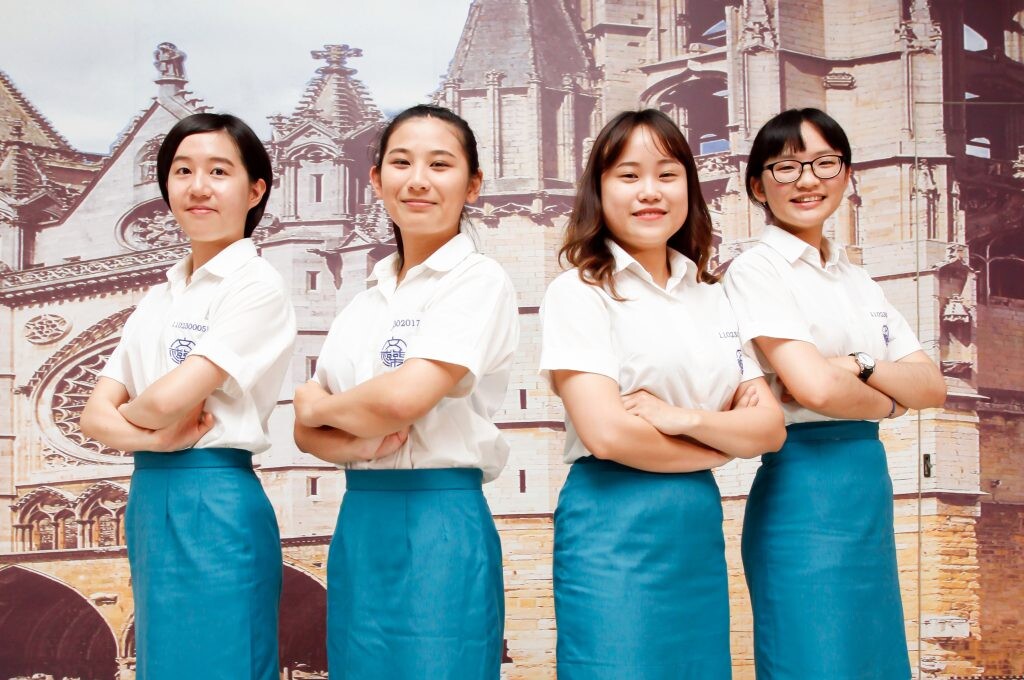 Yu-Wen Li was the first Wenzao student to take part in the program, and went to Germany on her own, rather than with a group of classmates. At the time, she was the only student from Taiwan at Konstanz, but she found a warm welcome there from the administration, teachers and classmates from around the world.

“Still, it was a more stressful experience than I was used to in Taiwan,” she said.

“In Germany, we don’t have regular tests, just one final exam, with one opportunity to retake the exam. Some people who failed both chances were really told to go back to their home countries. In one management class, the professor started out by explicitly telling everyone, ‘This class is not easy to pass, even for native German speakers.’” Li said she was on the verge of failing out, but managed to pass on her second attempt. “Frustration is inevitable,” she said, “but try not to put yourself under too much pressure. Just keep your head down and get through it.” 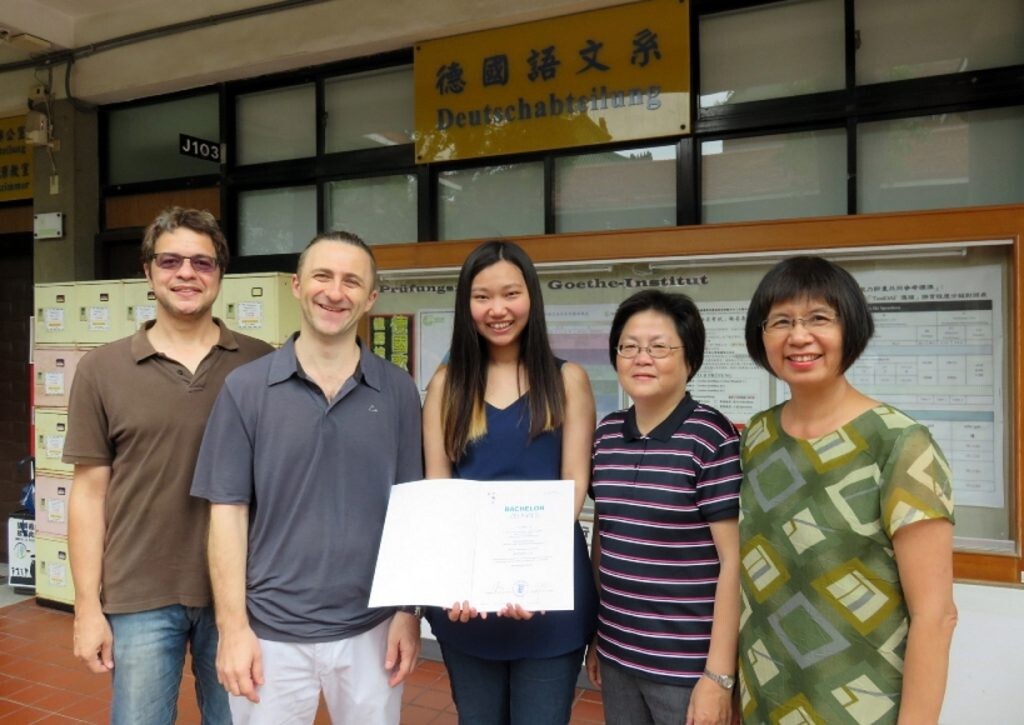 Yu-Wen Li comes across as very mature and calm. She related that, during her time at Konstanz, another Chinese classmate was overcome by stress and ended up being hospitalized, missing nearly two-thirds of the semester. “It’s quite normal to fail,” she said. “I didn’t want to paint myself in a corner.”

Li had initially considered staying on in Germany after graduation, but homesickness began to take a toll. “Living in Taiwan is still just so much more convenient,” she said. “Even though Konstanz is beautiful, everything closes up early and the streets aren’t well lit, so you get the feeling you’re living in the countryside. At times it was difficult to get used to living there and to feel at home.” After finishing the program, she returned to Taiwan where she’s preparing to take the national civil service exam with hopes to work in the National Immigration Agency.

In addition to this double degree program with Germany, Wenzao’s International Cultural Exchange Institute maintains ties with the Immanuel Kant Baltic Federal University and Rennes College, respectively offering Wenzao students opportunities to study in Russia and France. Wenzao also offers a double degree with Rennes College in its “three plus one-point-five” scheme, in which students can earn a Master’s degree through three years at Wenzao, followed by one and a half years at Rennes. Currently, two Wenzao students are pursuing this program.

While Wenzao is smaller than Taiwan’s national universities and came relatively late to the push for internationalization, the school is pursuing a clear strategy, with tremendous enthusiasm and concrete goals, creating an alliance between the church, the humanities and foreign languages. This approach has helped the university to steadily build a strong international presence.

In addition to making good use of resources to help students pursue studies abroad, Wenzao is also a globally recognized center of Chinese language learning. Despite growing competition from organizations like the Confucius Institute, Wenzao leverages the strong tradition of Catholic universities for language instruction and scholarship to establish itself as a leader in the field of Chinese and English language teacher training and certification. President Chen noted, “We cooperate with parties from around the world to provide excellent instruction and rigorous certification of Chinese language teachers. Foreign students at Wenzao are uniquely qualified to as Chinese language instructors in their home countries. Wenzao integrates our strengths and resources with our alumni network and local partners to provide highly qualified teachers and training programs deeply based on a strong appreciation of the humanities, and the results are felt around the world.” 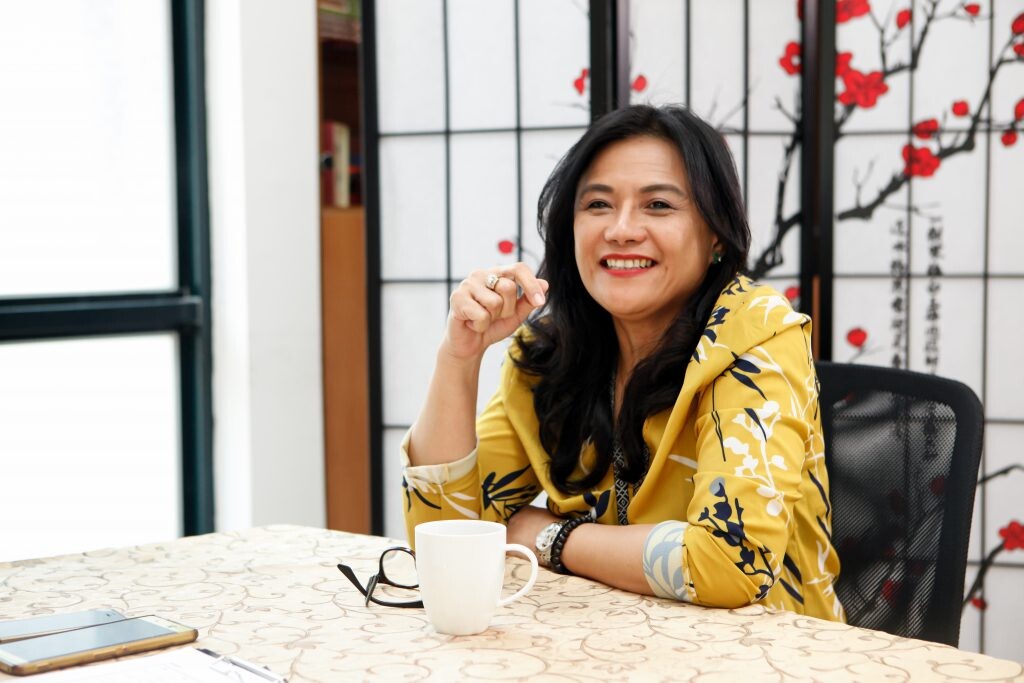 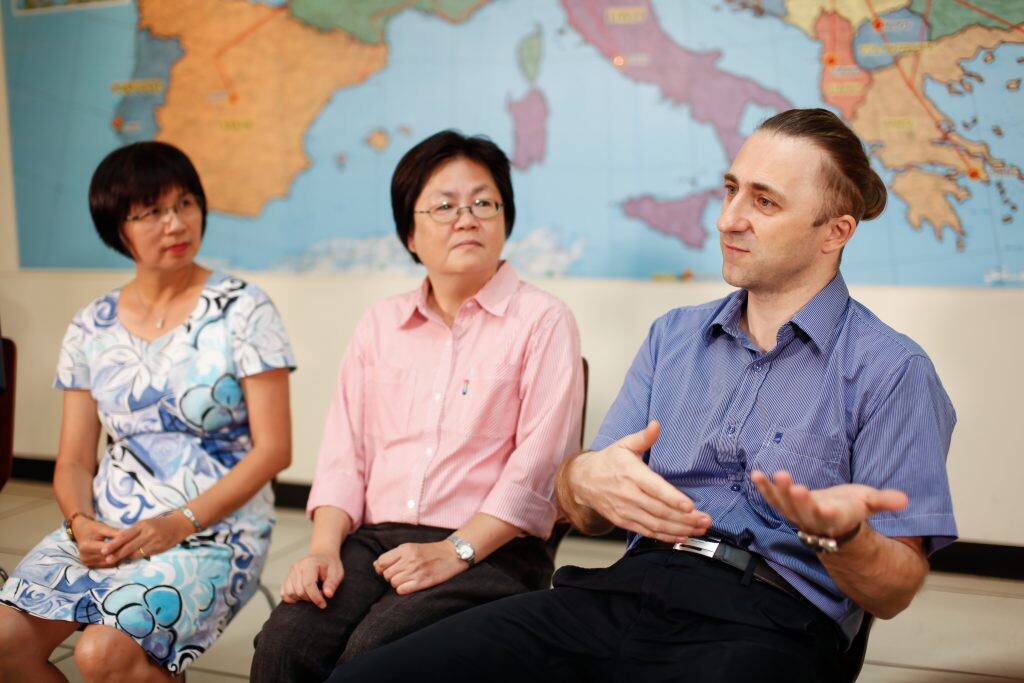 Wenzao’s foreign teachers are one of the school’s key strengths. The school’s International Cross-Strait Cooperation Office features Associate Professor Dr. Pai-Hsien Yeh, recruited from one of top universities in the Philippines. Each department has a foreign teacher responsible for assisting in international affairs and external relations, ensuring that foreign students at Wenzao acclimate easily and make the most of their stay in Taiwan.

All of these efforts have had a remarkable result, extending the academic excellence of Wenzao from this quiet corner of southern Taiwan to campuses around the world, creating a global network of institutions dedicated to quiet, steady progress.