The Dual Life of a Vietnamese Girl Finding herself in Taiwan

The Dual Life of a Vietnamese Girl Finding herself in Taiwan

Takming University of Science and Technology

In 2009, after graduating high school, an 18-year-old Vietnamese girl was at a loss for what to do next. Instead of heading to a local university for further study, she spent an eclectic year finding a new path. In 2010, with the support and encouragement of her family, she decided to start over, coming to Taiwan to study Chinese. After 10 years of hard work here in Taiwan, she has developed an active and eclectic career as a media host, speaker, Vietnamese language instructor and writer. She has also served as the host of the Taiwan National Day celebration. She is Nguyễn Thu Hằng. 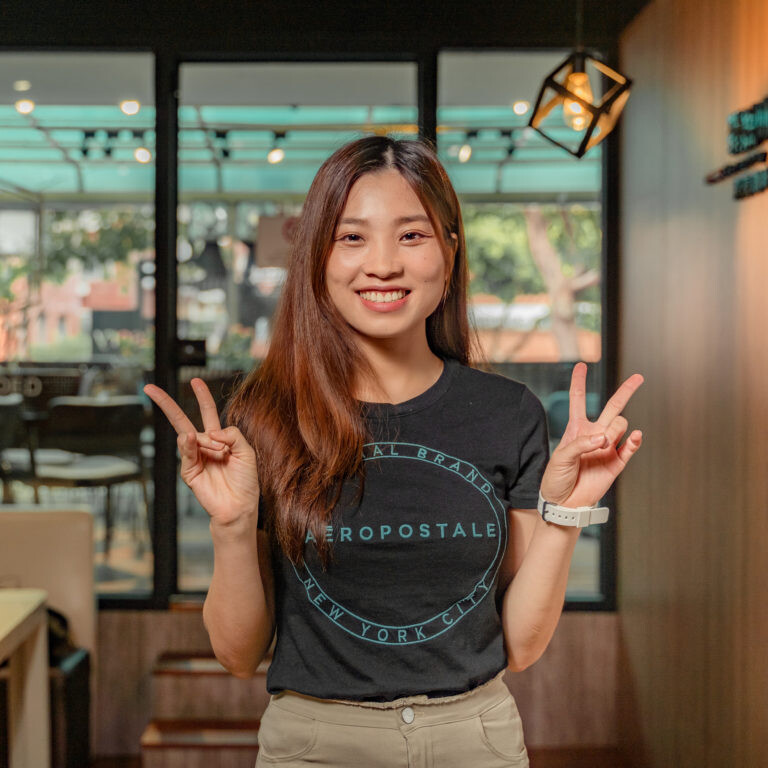 Nguyễn Thu Hằng originally planned to develop her Chinese language skills in Taiwan and then return to Vietnam to work as a Chinese translator. She arrived in Taiwan to began her studies, but there her life began to take an unexpected turn. She found that the learning environment and quality of instruction in Taiwan rivaled those in Europe and the United States. She found ample opportunities not only to study Chinese, but also to improve her English, thus raising her global linguistic competitiveness. Overall, she found the local culture very similar to that in Vietnam, and faced little in the way of culture shock. Transportation and daily life are also very convenient. Even without a kitchen in her apartment, she was never at a loss for things to eat, with neighborhood restaurants offering a broad variety of delicious meals. She soon decided that Taiwan had been the right choice as her study abroad destination.

Recalling her first job in Taiwan, she says she didn’t even understand the regulations for foreign students working in Taiwan. Without a valid work permit, her employer let her go after one day. After this experience, she made it her business to learn more about the relevant labor laws for foreign students. Soon, she was waitressing in family-style restaurants, but her limited grasp of conversational Chinese caused communication problems with customers. To overcome this problem, she took home one of the menus and spent the night memorizing it, filling the margins with Romanization marks to perfect her pronunciation. Through these efforts, she quickly acclimated.

“When I was studying in Taiwan, I met many Vietnamese people, including students and new arrivals. There were lots of community activities and, at first we’d all go along to participate, but gradually I started taking a more active role in planning cultural activities. This led to offers from the Vietnam Economic and Cultural Office in Taipei and other government agencies to help host some events, leading up to my hosting the National Day celebrations.”

In 2016, the Taiwan government implemented its “New Southbound Policy”, focusing attention on the languages of ASEAN partner countries. At the time, her husband (then-boyfriend) was producing Vietnamese films which gradually attracted greater public attention. This led to Nguyễn Thu Hằng receiving more invitations from schools and other institutions to teach Vietnamese, leading to her developing a career as a professional lecturer in Vietnamese language. For her, this career is not simply about teaching language, but also an opportunity to share Vietnamese culture.

In talking about her teaching experience, Nguyễn Thu Hằng said she tried to make language learning fun and engaging by designing language-based classroom games and developing innovative assessment methods. For example, mid-term exams take the forms of project proposals, with film students creating original films, while students with a journalism background presented interviews conducted with Vietnamese people. She believes that these departures from textbook learning allow students to learn more quickly and stay more engaged with the language.

“After teaching for a while, I decided to go back to school to get formal advanced training in education. Today, I’m still studying at the National Taiwan Normal University Graduate Institute of Curriculum and Instruction.” In addition, to maintain her own Vietnamese fluency, she still takes time to speak Vietnamese every day.

At first, she had not special reason to set up a YouTube channel – it was just a place for her to share some videos related to Vietnam. Overtime, however, her YouTube channel and Facebook fan page gradually attracted additional followers, and she and her husband teamed up to develop a cross-border, cross-cultural communications channel to promote films related to Taiwan and Vietnam. Through this process, she became increasingly aware of the lack of mutual understanding between the two countries, further encouraging her to develop this channel for communications and awareness.

Each film featured on the channel is the result of brainstorming between Nguyễn Thu Hằng and her husband. These discussions invariably involve some degree of disagreement. Rather than let disputes compromise the ultimate quality of the film, they just take a break and think about what they’re trying to achieve, usually coming back with better ideas and renewed enthusiasm.

Once, Nguyễn Thu Hằng received a message through the channel from a 2nd-generation Vietnamese resident of Taiwan, saying, “Watching your video not only encouraged me to help find a sense of identity, but also made me feel proud of being Vietnamese.” Responses like these make her feel moved and encourage her to continue to keep going.Finding oneself

After ten years in Taiwan, Nguyễn Thu Hằng acknowledges that while her current career is still developing, all that she’s accomplished was made possible by her coming to Taiwan. “Today, I have a college degree, I have a husband who loves me, I have my own career, and I can speak Chinese. These are my greatest accomplishments.” Each aspect of her career gives her reasons to cherish her life in Taiwan, where she has had so many opportunities to develop. Asked if she had any advice for students considering coming to Taiwan, she smiled and said “Chúc các bạn có những trải nghiệm thật tốt đẹp khi đến với hòn Đảo Ngọc Đài Loan” – “Come to Taiwan – you’ll have a wonderful experience here.”